Chicago Mayor Rahm Emanuel stopped by the Summit and listened to some of the many ideas generated during the group sessions.

(5/21/13) On Change the World weekend, more than 400 United Methodists gathered at a high school on Chicago’s south side to start a movement.

“This is just the beginning,” said Bishop Sally Dyck at the Chicago Urban Strategy Summit at South Shore International College Preparatory High School on May 18. “Churches have already been involved in their communities but people get weary. But when they know other people are supporting them, partnering with them and learning from each other, that’s what creates a movement.”

The summit began with music, praise and worship. Bishop Dyck then challenged each church in Chicago and beyond the city limits to take action, mobilize and begin to develop a comprehensive plan to address the city’s problems. Participants divided into sessions to identify and list resources around four key issues that impact Chicago residents: community safety, restorative justice, education and literacy, and food security.

Chicago 8th ward alderwoman, Michelle Harris attended the summit and said the gathering is a great start to making a difference in the city. “I am grateful and honored to be here at a time when the church said we’re going to embrace communities and make them a better place to be,” said Harris. “When you bring God into the mix, some wonderful things are going to happen.”

Bishop Dyck met with Chicago Mayor Rahm Emanuel in January to start building a partnership with the city. The mayor stopped by the Summit and listened to some of the many ideas generated during the group sessions. He thanked United Methodists for coming together and working on the many issues he says he is also passionate about changing.
“You’re building a plan,” he told the crowd. “You’re taking the spirit of your church – not just what goes on on Sundays – outside those doors to bring the warmth, affection and love to our city and community and most importantly to the kids.”

In honor of the Urban Strategy Summit and acknowledging the United Methodist Church’s longstanding commitment to the peace and well-being of Chicago, Mayor Emanuel declared May 18, 2013 United Methodist Day in Chicago. “For us to do what we need to do in the city of Chicago, this Methodist church and all of you will be a part of what we’re doing.”

The groups reported some of the ideas that came out of each session such as; partnering with other churches, adopting a school, rethinking second chance and zero tolerance, treating drug addiction, valuing education, creating safe zones in churches, planting more community gardens and partnering with farmers, and continuing the conversation.

Chicago Police Commander Eugene Williams, a United Methodist, addressed the group saying this was an historic day. “This is the first time we have come together collectively, as a United Methodist church in the Northern Illinois Conference to bring our resources to bear on some of the issues that are plaguing our city,” he said adding that arresting our way out of the problem is not the answer. “I am proud of my work as a Chicago police officer but really proud to be a United Methodist on this day.”

At the end of the Summit, the Bishop led everyone outside the school to Rosenblum Park. Participants held signs with the names of the 112+ victims who were killed by gun violence in the city since January 1. The group marched around the park chanting “What do we want? Peace. When do we want it? Now!”

At each corner, the group stopped to pray for an end to violence and safety in the schools. The Bishop then dedicated a Peace Pole which will permanently be placed between the school and park.

Bishop Dyck prayed, “Oh God, we ask that you will bless this pole that stands here in all of its languages and symbolic presence that each and everyone who sees it will have hope that there will be peace in our city, peace in our country, and our world.”

As the day ended, Bishop Dyck reminded everyone that this is just the start of an urban strategy for the city of Chicago. “We have a lot of work to do,” she said. “It’s a big vision, a tremendous need to network, but that’s what it means to be United Methodist. We’re connectional!” 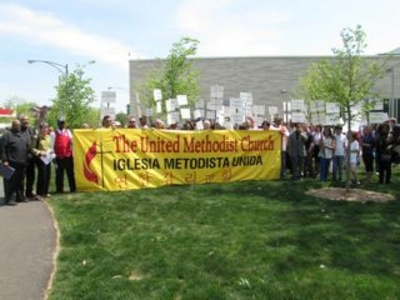 Mr. Saul Garcia, spouse of Rosa Garcia, Lay Missioner with the Northern Illinois Conference, passed away Sunday, July 16, 2022, while visiting his hometown in Mexico. Rosa currently serves as a Dis…

Jesus said we are the salt of the earth. (Matthew 5:13). I heard someone else comment that all too often we tell people, “Go to the church! There’s salt there!”  when we should be out sprinkling salt w…