10.3 million Methodists and 750,000 members of the EUB Church merged into one of the largest Protestant denominations in the world. Flags from fifty-three countries testified to the breadth of the new reality. At the same time, the systematic racism of the former Methodist Church's segregating Central Jurisdiction began dismantling.

That same year, the United Methodist Council of Bishops signed a concordat with the British Methodist Conference committing to ongoing dialogue and increasing shared experiences saying "members of the same family belong together and British and American Methodists are the same family."

Returning from the holiday break, I found a copy on my desk of Albert Outler's sermon "Visions and Dreams" preached at the uniting General Conference. It was a reminder from a faithful staff member that it was time to begin preparations for Heritage Sunday, to be held this year on May 20. This year's theme is "JUBILEE: The 50th Anniversary of The United Methodist Church."

Outler's sermon celebrates the April 23, 1968 birthday of The United Methodist Church with "an aura of hope," as the new church gathered at the "threshold of a new horizon."

My first read struck me powerfully with the sense of the moment in time when the sermon was delivered in 1968---Martin Luther King, Jr. and Robert Kennedy's assassinations April 4 and June 5, Vietnam War protests, the sexual revolution, Chicago Democratic National Convention, Vietnam War and protests, the law and order platform of the Richard Nixon election---times as turbulent, divided, fearful, discontented and demoralizing as any time since. Citing the biblical text for Pentecost (Acts 2: 2-21), Outler calls the new Church to a bold choice of unity in the face of the surrounding chaos and offers markers for living-into a truly UnitedMethodist Church. His words speak as loudly today as our denomination's birthdate. Outler asks the faithful to consider that if the Church cannot be a hope-filled difference-maker in and for the world---let alone itself---then who will?

Where once there were five different churches, now there is one. Differences that once kept us apart---language, race, folkways, piety, personality and differing practices of democracy have been overcome. Separated Christian brothers and sisters rooted in a shared ethos of personal and social holiness are joined as family.

The real work of The United Methodist Church begun that day in April, 1968, Outler says. Though fraught with the same complexities, doubts, frustrations and failures of the first Pentecost, the new United Methodist Church will also be filled with new possibilities for reformation and renewal because the joining of what was once separate will make for a better, stronger, more complete, well-equipped church. However, this will only come to pass if the new church raises-up "frontiersman for tomorrow, dynamically adaptive to the new world as our forefathers were in theirs."

The sermon then stakes-out the life of the new United Methodist Church in tripartite form---"truly catholic, truly evangelical and truly reforming,"---not in hierarchy but in careful balance:

The eyes of the whole Christian Church are on us at this moment, Outler said of April 23, 1968. "This is also the day the Lord has made, one for United Methodists to rejoice and be glad. . . . glad for the new chance God now gives us to be a church united, to be uniting, a church repentant, to be a church redemptive, a church cruciform in order to manifest God's triumphant agony for mankind."

I haven't been able to put this sermon down. I've shared it with the Council of Bishops, the Connectional Table, the General Secretaries Table and The Commission on A Way Forward. It will be one of the Heritage Sunday resources we share this year with every congregation across the Connection.

Some will say that was then and this is now. Times have changed, and circumstances and issues with them.

I cannot help but be struck that at The UMC's 50th birthday, the mood of the church is anything but jubilation. Jubilees aren't on the agendas, church news or denominational blogs I read. What I sense there is more anxiety, edginess, defensiveness, anger, and negative predictions---more "coming-undone" than "coming-together."

I'm with Albert Outler---the eyes of the whole Church are on us.

In that context, I offer "Visions and Dreams" as required reading to remember and stoke the hope of our 1968 birthright---boldly choosing unity while the world around seemed set on pulling-apart, embracing the challenging and complex work of unity, trusting the creative work of Holy Spirit and setting its feet to the path of a church that in Albert Outler's words lives and grows by its being "united to be uniting, repentant to be redemptive and cruciform in order to manifest God's triumphant agony for mankind."

Moving to and through 2018 and towards 2019 and a special General Conference, God give us a golden anniversary year.

*Rev. Day will be presenting at this year's Northern Illinois Annual Conference on Tuesday, June 5 at 9 am.

Watch video from the Uniting Conference in 1968 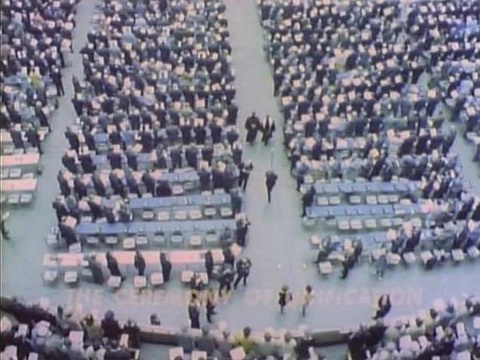 I’m one of those (few) people who actually likes to cook Thanksgiving dinner. A big turkey with dressing with lots of leftovers to make into soup. But this year, the food will be…

A different kind of Annual Conference

The 181st Northern Illinois Annual Conference with the theme “Y Church” was marked by some firsts and lasts. In response to the COVID-19 pandemic and efforts to keep members safe and healt…

The first Sunday of Advent is right around the corner on Nov. 29. Many churches have had to shift plans as the number of COVID-19 cases continues to rise in Illinois. We are compiling some great…